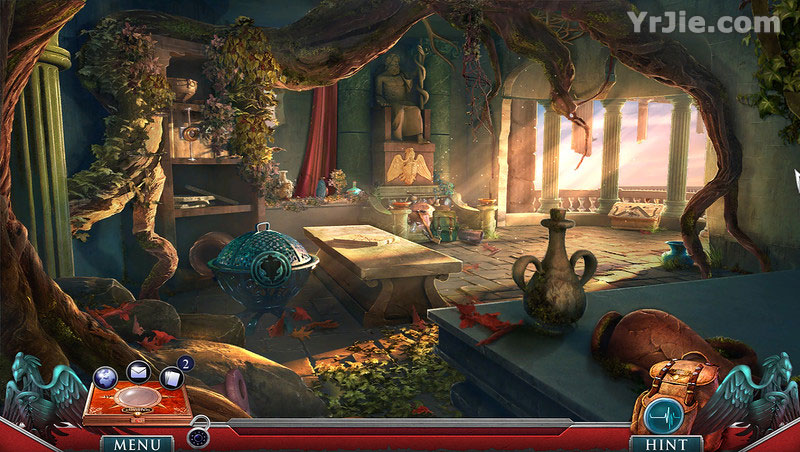 We played Hidden Expedition: The Curse of Mithridates on the easiest difficulty mode, rarely skipped any puzzles, and completed the game in around four hours. I actually don't mind easy puzzles, as long as they are fun. In terms of entertainment and relaxation, this game delivers just what you need! It is a perfect game for a lazy day.

If you are new to HOPA games and not sure about puzzles, then there is a skip button available. The hidden object scenes are nice but easy, just as the minigames and the entire game. Those looking for an intense challenge won't get it from the game either. The Collector's Edition is also quite rewarding, it includes a strategy guide, wallpapers, concept art, a screensaver, soundtracks, achievements, collectibles, morphing objects, and a secret room.

The scenes are fairly clear and items are not difficult to find. This Collector's Edition has 9 Achievements to earn, 14 VG Team pictures, 11 Music Soundtracks, 6 Wallpapers, 12 Concept Art pictures, a built in Strategy Guide and a Bonus Chapter, enjoy! The production team did a great job with the sights and sounds. The story doesn't get a lot better as you play, you have cliche over cliche with a few minor exceptions which I won't reveal in order not to spoil your experience, the story of the game seems uninspired and It really can't draw you in.

The Hidden Object Scenes are varied, with finding Keywords in a Sentence etc. Most of the HOP's offer a small interactive puzzle to solve. I've been a fan of the Hidden Expedition: The Curse of Mithridates series and really enjoyed the games in the series. I'm really liking what I'm seeing from this new game.

Don't forgot to look for the Morphing Object in each scene. The voice overs seems to be recorded by some really bored actors and the soundtrack doesn't excel either. There was never a moment of boredom playing the game. HOGS: There is a nice variety and I'm truly enjoying them. You're not bored with the same old same old.

Hidden Expedition: The Curse of Mithridates does not disappoint when it comes to length either. Playing on the easiest mode, we spent over six hours on the main game. Not only are there a lot of puzzles but some are different and some are challenging. This game has fairly nice graphics, but could be a bit clearer. Hidden Expedition: The Curse of Mithridates has a great story, cute hidden object scenes, fun puzzles!

The hidden object scenes and the puzzles are also quite standard. As always, try if out for yourself and see what you think. For the experienced player, this game doesn't hold much of a challenge. This game seemed more geared towards the beginner player, as it was on the easy side.

Puzzles are simple and don't take any brain power to complete, but done well.